The Counting Actors Project is managed by Bay Area actor Valerie Weak, and began in June 2011 on her own blog. Works by Women San Francisco began hosting the project in February 2014.  The archive of all past posts can be found here.

General information about the project, as well as selection criteria for shows and a show submission form are here.

Before I get to the numbers for November, an announcement.  At the end of December 2018, after 7.5 years of counting data and logging over 1100 productions, I’ll be wrapping up the monthly reporting phase of this project.  Plans for reviewing and reporting on the collected data are in the works, but it’s too early to say more about what that will look like.

Here are the stats: 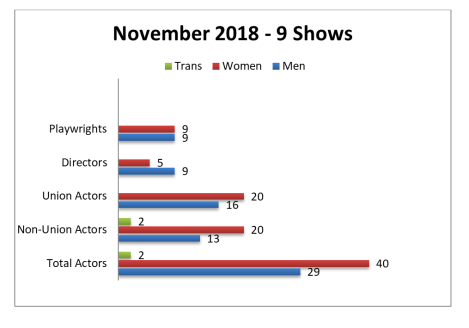 Shows included in the November count:

Thank you so very much to the audience and cast members who used the Counting Actors form to contribute show info this month, including Sheila Devitt, Matt Weimer, Anne Hallinan, and Karen Thomson Hall.

Please share these numbers with your colleagues and use them to start conversations in the green room, the lobby or your favorite theater focused social media group.  If you’re seeing or working on a show with December performances, go here to learn how to share the info with the project.  It’s a quick and easy form that takes less than five minutes to fill out!

Want to learn more? Visit the Women in the Arts and Media Coalition website and check out their studies page.  You’ll find links to regional, national and international data on representation of women artists in theater, film/tv, literary arts and more, including ‘Not Even, A Gender Analysis of 500 San Francisco/Bay Area Theatrical Productions 2011-2014 from the Counting Actors Project’.   This report, commissioned by WomenArts, compiled data from this project to study trends over time.  WWSF’s article about the report, including links to report graphics, key findings and raw data, can be found here.

Statistics for December will go up between January 1st and January 5th.  And that January post will be the final post for the project.  Stay tuned!