In the past ten days, I have enjoyed the uncommon pleasures of seeing women strut, writhe, and smoke a pipe from center stage. The three local productions that featured these femme-tastic theatrical moments don’t have much in common on the surface, but taken together they feel like a swell in the rising tide of artists making whoopee with gender status-quo in American theater.

I got to see women strut and writhe in both Boxcar Theatre’s raucously illicit production of Hedwig and the Angry Inch (for which director Nick Olivero inventively split the character of Hedwig into 8 different personae played by female and male actors using a fluid range of gender presentations) and FOGG Theater’s sinfully silly production of The Cable Car Nymphomaniac (based on an historic SF court case and featuring cleverly salacious songs composed by Tony Asaro.) While the strategically skimpy costumes female characters wore in both productions were nothing new, what did grab my attention was the fact the women in Hedwig and Nymphomaniac were behaving sexually onstage for their own pleasure with no hint of apology. When women’s sexuality is conjured in drama, the line between subject and object can often be pretty hazy. Seeing women demonstrate sexual agency onstage still feels like a theatrically radical act. 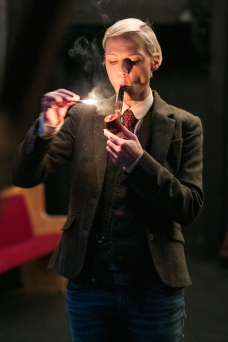 Shotgun Player’s gorgeously spare production of Our Town, directed with sensitivity and grace by Susannah Martin, offered the subtler but no less distinct pleasure of watching Madeline H.D. Brown embody the iconic character of the Stage Manager while puffing on a tobacco pipe. Brown simultaneously radiated both her own uniquely feminine presence and a quintessential maleness – at times, she seemed to be directly channeling Thornton Wilder as he might have played the role on Broadway in 1938. Another thing I loved about this production was how many women there were onstage! An ensemble of eight women and six men brought Our Town to life. While all the performers were wonderful, my memory of the production (which has now become my mental blueprint for the play) will forever be dominated by the shining faces of El Beh, Molly Noble, Michelle Talgarow, Sam Jackson, Christine Macomber, Karen Offereins, Valerie Fachman, and Madeline H.D. Brown.

Moment by moment, scene by scene, production by production. This is how our theatrical imagination will gradually shift, until the day comes when we can see women center stage and no longer be surprised.

Christine Young is a director, dramaturg, and associate professor in the Performing Arts & Social Justice Program at University of San Francisco. She created and curates Works by Women San Francisco.