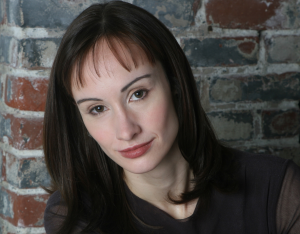 When I got my Equity card in 2008, I noticed how much harder it suddenly was to get acting work. In 2010, two other AEA actors and I founded Symmetry. Our mission is simple: We strive to produce stories that have significant female characters; we will not produce a script that has more male characters than female; in casting, we will not hire more AEA men than women. We also try to focus on gender parity when it comes to choosing playwrights and directors.

ACT: What do you think are the most urgent or significant challenges women theater artists face right now?

Equal pay for equal work! Female artists should not have to work under different circumstances from their male counterparts. We all have similar career aspirations as artists, train at the same schools and pay the same Equity initiation fees and dues. Therefore, the gap between the number of AEA women who are making a living/obtaining health insurance as actors vs men who are seems quite unreasonable. I would argue that this is not just an issue of local actresses bemoaning the injustices of the hiring practices of local theaters. It’s a national issue. If President Obama can manage to pass the Lilly Ledbetter Fair Pay Act, I really see no reason why our theaters and artist unions should not be taking this issue just as seriously.

I’ve appreciated seeing all of the forums and blogs that have cropped up in the past few years. I’m also very glad to have seen International Centre for Women Playwrights create an award for theater companies who have achieved gender parity in playwriting.

ACT: What tactics have been most effective or least effective? Why do you think those tactics worked or did not work?

I think it’s been important for us to include male actors, playwrights and collaborators in our projects. We’re not trying to create an all-female paradigm for our company, but simply a gender-balanced one. It’s been refreshing to meet so many talented men who are sympathtic to our mission and have wanted to lend their talents to the cause. In general, I think the more men we can get onboard with the gender parity movement, the more quickly we will see change. In my opinion, eliminating the “us” vs “them” sentiment can be nothing but helpful.

Well, we only produce one or two shows a year, and have not yet escalated to a budget level where we ourselves are able to offer health and pension AEA contracts, so we’re not literally making a dent in closing the gap yet. Hopefully soon! At this point in Symmetry’s development, our most important purpose has been raise awareness to the issue by showing an example–in our small way– of the type of theater community we would like to see. The fact that so many people seem to have heard about our small company, and that those people know and understand our mission leads me to hope that we’ve been doing something right.

If you have a limited amount of time to go out and see plays, support companies who support gender parity. With your attendance of a play, you are casting a vote toward the type of theater you want to see more of. On the flip side of this, I often wonder if the larger companies who don’t have much parity in their seasons have done so not because they are anti-women, but simply because they have not seriously considered the issue. If you have the time, I think one of the best things anyone can do is write a letter or email to the company expressing your concerns. A friend recently told me that she was about to renew her season subscription to a company the very day she got their season announcement in the mail. But once she opened it and saw the complete lack of parity for the season, she instead decided to write a letter to the Artistic Director explaining why she would NOT be renewing her subscription. I think more ADs need to hear this. Part of their job is to provide ticket buyers with the types of shows they want to see. Ironically, most ticket buyers are women, but if these women keep buying tickets and season subscriptions regardless of company’s continual lack of gender parity, there will be much less incentive for the company to change.

On May 2, she co-moderated a gender parity tactics Twitter Howl with Marisela Treviño Orta. Check out their summary of links and resources from that discussion.

One response to “TACTICS: Interview with Chloe Bronzan”