Tanya Orellana is a set designer and technical director for Intersection for the Arts.  A graduate of the San Francisco State Theatre Arts Program, she has designed for many Bay Area theater companies including Campo Santo, with whom she is also a company member, Erika Chong Shuch Project, WE Players, Word for Word, and Golden Thread Productions. Tanya spoke with Works by Women San Francisco about her training and influences and her perspective that theater satisfies a basic human need for storytelling.

WORKS BY WOMEN SAN FRANCISCO: What’s the path that brought you to working in the theater?

TANYA ORELLANA: I was always interested in theater, but it took me a while to realize that people could major in theater and that you get paid to do theater. In my freshman year in college, I was studying historical architecture. I enjoyed my major but I ended up wanting a work-study job that wasn’t in an office, so I signed up to be a theater technician. And I loved it! I worked with people who were in the theater, and their classes sounded similar to my architecture classes, and like my major, they had a lot of art history, and architecture classes in the theater department, except they got to use that information to create sets and to do something creative. So I think the opportunity to actually work in theater and see it as a lively career was how I ended up in theater.

WWSF: Who are some of the artists who have influenced and inspired you?

TANYA ORELLANA: I would definitely say, as a lover of color and texture, I’m a big fan of Julie Taymor. I’m also a big fan of Tim Burton. And, I think I was very influenced by growing up in the Mission, and having the color palettes of the Mission muralists on my mind. So Susanna Cervantes and Precita Eyes, and growing up around so much public art were big inspirations. I would also say one of the major influences I had in choosing to be an artist was this Salvadoran painter named Miguel Angel Orellana (no relation). I met this painter through my aunt, and I worked with him for a month, going to his studio three times a week and taking semi-private lessons with him. There were 4 other students in the room and he was just this old man who had lived through two different wars in El Salvador. He’d experienced so much death and loss. And he lived in this little studio and taught out of it, and he was so adamant that the most important thing he could have done with his life was to be an artist.  He believed that it doesn’t matter if you are poor or living through war; if you want to live a life of value, you should just keep doing art. I remember thinking ‘My God! Yes!’ I come from a country that has some opportunities, yet it’s still a country where artists have to struggle to survive. I mean, we are involved in a war now, but there isn’t war in our streets.  And this civil war in El Salvador was so bloody that to think that somebody could live through that and still find it especially valuable to continue doing art, was a huge influence for me about what I wanted to do with my life.

WWSF: You got your degree at San Francisco State.  What kind of training did you receive there, and how has it prepared you for a career in theater?

TANYA ORELLANA: I received amazing training! Anyone who is interested in design should know that the program at SF State is a hidden gem. John B. Wilson is the set design teacher and he’s amazing. He has a Master’s from State and an MFA from Carnegie Mellon. He’s at the top of his game in the Bay Area. He works with all the major houses. He’s amazing. On top of being a very skilled artist, he’s a great teacher. He knows how to critique without making you feel bad. The lighting design teacher, Joan Arlinger, works at the SF Opera. The TD there came from the New York Metropolitan Opera before she worked with us. So all the teachers at San Francisco State have a really high level of skills and experience.

Also, there are a ton of opportunities to work as a design – I think I did 10 designs while I was there.  I’ve talked to other students who have studied set design, and for whatever reason, there weren’t enough shows to design, or only masters students got to design, so they only got to do 1 or 2 designs. But I feel like I got a lot of opportunities.  I always recommend SF State to anyone interested in design.

WWSF: You currently work as Technical Director at Intersection for the Arts.  Describe your role there.  How do your skills as a technical director inform your work as a designer?

TANYA ORELLANA: As the Technical Director at Intersection for the Arts, I am in charge of anything that has to do with lights, sound, or sets when we have a show, or anything to do with an in-house rental.  Being a TD, there’s definitely a practical part of you that influences your design – you think about what needs to get done, how it’s going to get done, and where it’s going to get done. Sometimes, that’s not really the best though, because there’s part of you as a designer that just wants to go nuts, but then you’re like “Oh wait! Someone has to build this thing,” so sometimes that TD knowledge can be something that you actually have to push past.

In the initial moment of creativity, before I start editing myself down, I have to try not to think like a technical director.  I have to just see what I can do, and then pare down after that. The other part, particularly at Intersection, is that because we’re a cross-disciplinary organization, being around so many different types of art forms has had a huge influence on me. I’ve learned that anything can happen on a stage.  Being at an organization where there are many kinds of artists running around trying to break the barriers has been influential on my work.

WWSF: You designed the set for this year’s ReOrient Festival. What was special and noteworthy about it? 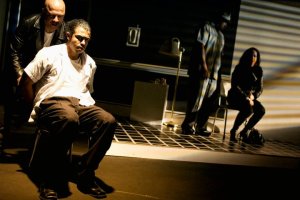 TANYA ORELLANA: I was amazed by how many people were involved in the creation process and how smoothly it went. It was a festival, so…6 directors…4 designers…a TD…an Artistic Director…lots of strong voices, and yet, I felt like the design was really cohesive and served all the different stories that were part of the evening. It was the first time I had ever done a festival, and I was definitely apprehensive about what it would be like to have that many directors involved and to have that many opinions swirling around, but it worked out. I really like that the set design was able to work for all six of the plays, without it being a completely abstract thing. I remember at one point, we were talking about cubes, a blank canvas with boxes – but those ideas didn’t excite me too much. I was happy that we came up with a design that was somewhat specific and yet which worked for every play. What amazed me was that we somehow managed to imagine something that was universal and yet was appropriate for each individual play as well.

WWSF: What are the challenges facing women in American theater?

TANYA ORELLANA: I think the thing that comes to mind first is communication, and asking yourself how much do you privilege your personal process versus giving in to group communication. Sometimes, it feels like there can be dominating male voices in a production meeting, and you can step up and be a dominating voice as well, at the risk of giving up your own process.  Because, if you like to listen, and think, and collaborate on a comfortable level, but you’re in a room full of people who are concerned about who has the most power, there’s a tension sometimes between women stepping up and behaving in a way that makes men more comfortable, and men realizing that maybe women have a different more feminine process, and that’s what we bring to the table. But I think knowing when it’s time to be forceful, and when we’re just pushing because everyone else in a room is being forceful is a gender issue that we need to look at in the theater.

WWSF: What gives you hope for American theater?

TANYA ORELLANA: I think it is such a basic thing to have a person perform and to have others watch and listen; and just the idea of humans telling stories is so valuable. Whether it is a million-dollar budget or even just a person in a room telling a story, it gives me hope that theater is a basic human need.